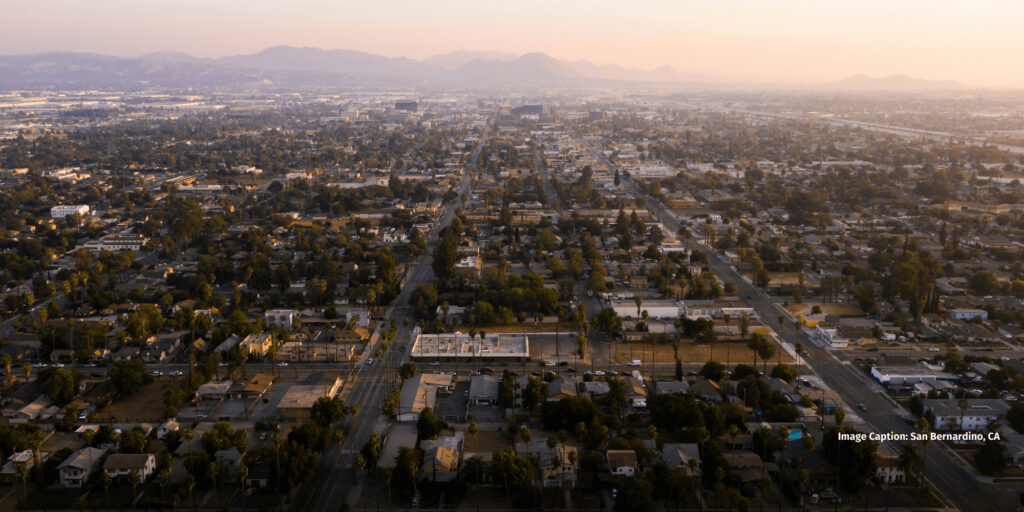 Southern California’s Inland region, comprising Riverside and San Bernardino counties, covers a vast terrain of more than 27,000 square miles and is home to more than 5 million people, making it the third most populated area in the state. For decades, development in the region has been driven by corporate interests for cheap land and labor. Once a major center of the citrus industry, the Inland region now hosts the largest concentration of distribution warehouses in the country, where the world’s major corporations such as Amazon, Walmart, Target, and hundreds of others operate an expansive network of distribution hubs. The logistics industry is the primary producer of deadly toxins and pollution in the region as a result of the thousands of diesel trucks that are a critical component of transporting goods from warehouses to households all over the country. Over the last few decades, demographic shifts in the region mean its population is now a majority of working communities of color, of which 65-75 percent are Latinx, 15-18 percent are African American, and 8-10 percent are Asian residents. Due to rapid population growth and the pandemic, demand for housing has accelerated, making the region experience the highest increase in rental prices in the nation at the beginning of 2021. The median household income of $55,000 combined with high rates of poverty, which exceeds the state's poverty level, has made the Inland region fertile ground for continued organizing efforts and battles led by directly affected community members, people of color, workers, formerly incarcerated people, renters and people experiencing homelessness, immigrants, youth and women.

Despite the Inland region's current socio-economic landscape, the organizing battles have existed for many generations, from Indigenous people’s struggles for self-determination, to actively engaged farm workers who fought against a deeply rooted and racist agricultural industry, to the ongoing struggles of warehouse workers fighting for dignified working conditions and tenants demanding accessible housing for all. The rich history of powerful organizing in a heavily racist environment has made the Inland region a unique place where leaders continue to develop innovative and inspiring strategies to combat poverty, exclusionary housing policies, climate and environmental crises, and racism. Well established organizations lead powerful and successful campaigns to promote racial, economic, environmental, worker, and housing justice and to shrink the criminal legal system to clear the path for similar campaigns in communities across the country. Integrated voter engagement with new voters and voters of color has shifted the political landscape and forged lasting partnerships with local elected officials. As the US begins to recover from the COVID-19 pandemic, the innovations and organizing power of the Inland region’s social movements makes it a strategic community for deep investment.

The Fund for an Inclusive California and Neighborhood Funders Group partnered with the amazing organizations leading the fight for racial, economic, housing, and environmental justice in the Inland region for a virtual learning visit in July 2021 for funders and philanthropic support organizations. During this three day event, grassroots leaders, workers, and people directly impacted by the intersecting conditions in the region shared how foundations can fund movement partners so they can continue to build power!

Note: This event was for funders, philanthropy networks and affinity groups, community groups organizing in Southern California's Inland region, and invited guests only. Video recordings of the panels from the event are available. If you are a funder who is interested in accessing these recordings, please email manisha@nfg.org.

Pictured at the top: An overhead view of San Bernadino, CA.

Stay up to date with us!